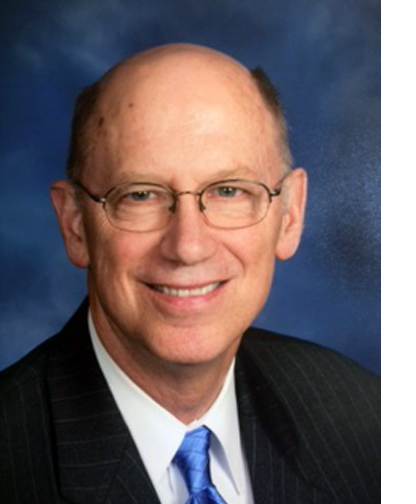 John Simmons was born in West Point, Georgia, and graduated from West Point High School.  He followed in the footsteps of his father and grandfather graduating from Georgia Tech in 1971 with a degree in Biology. After Tech, John attended Chicago Theological Seminary and later received a Doctor of Ministry from Candler School of Theology.  He was ordained in the United Methodist Church and served churches in the northeast quadrant of metro Atlanta for 41 years, including 5 years as District Superintendent in Athens and 5 years on the staff of the North Georgia conference.  Currently he serves as senior pastor at St. James UMC in Atlanta.  John and his wife Helen have 2 married adult children and one granddaughter. Helen's dad, Bob Uhl, is also a Tech grad.

We asked John to reminisce on his experiences as a graduate student in the School of Biology at Georgia Tech.

Who was your favorite Biology professor and what was special about them?
Without question it was Dr. Ed Yeager.  I think I only had two classes with him: Genetics and Biophysics. He was very good at lecturing.  While he had a grouchy disposition much of the time, he knew his material and could communicate effectively.  He did not suffer fools gladly.  He was demanding.  The Biophysics was the most demanding course in Biology by far, and the best in terms of the scope of knowledge covered.  Dr. Yeager’s passion for quantum mechanics was infectious.  We were all in over our head and he was glad to see us in the deep end.

What was one of your most memorable experiences in the school of Biology and why?
My most memorable experience was vocational.  I intended to go to medical school.   I enjoyed the sciences and was a good enough student, but did not enjoy the memorizing of biological terms.  I liked the intricacy and elegance of the sciences.  I also enjoyed that Biology majors had more opportunity for electives than any other major except maybe Physics.  I gravitated toward English, sociology, philosophy and humanities courses.   But my junior and senior year, I realized that every night I had to bribe myself with studying the biology with its memorization before I would let myself study the liberal arts courses that I was really enjoying.  I wanted to get in medical school and good grades in all my courses were vital.  But I found out that learning biology “stuff” was not nearly so life giving as the more liberal arts courses. So the School of Biology allowed me to test out my deep vocational longings and go in a different direction than medical school.  Upon graduation, I had been accepted at medical school, offered a position in the Peace Corps in Africa, accepted at a seminary to study for ordained ministry, and offered a scholarship from the World Student Fund at Tech to spend a year in Zurich, Switzerland at the Federal Institute of Technology.  I chose a year in Zurich.  I think I got the WSF scholarship because of the electives.  It was a great year in Zurich.  Electives among other Tech students in other than required courses were my most memorable educational experience as a Biology major.

What was the most important lesson learned at Tech that has best served you in your career?
Education at Tech is the proverbial drinking of water out of a fire hose.  But there is a confidence that comes from getting through it.  It is not so much what we learned or even retained, but that we met the challenge.  We had to confront demands of our time and energy every day.  Learning how to navigate problems of all kinds and to persevere was my main learning.  We laughingly referred to Tech folks as “analytical problem solvers.”  I believe I had some aptitude for problem solving in a broad sense before coming to Tech, but I had rich opportunities to experience difficulties and friends who would help one another as needed.

My most intense experience at Tech was going on a summer trip in 1969 sponsored by the YMCA to Eastern Europe and the Soviet Union.  About 10 of us got real close, going through a lot of great times and hardships.  Our most difficult time came when our adult advisor, Neil DeRosa, then director of the Georgia Tech Placement Center, had a massive heart attack as we arrived in Leningrad (St. Petersburg) and died.  During that summer we chose a couple of novels and read each other’s books.  We had great discussions.  I got a great education and I grew up that summer.

How did you make the move from biology to theology?
Bill Landiss was the United Methodist campus minister at the Tech Wesley Foundation.  I began going there after the Russia trip before my junior year.  The Wesley Foundation was an oasis for me.  I was constantly reminded by Bill that the goal of life is not to plan for some future but to live in this moment- love people now.  One day I was discussing a morning prayer used that morning in Sunday Celebration.  I was taking an elective in the English department, “The Bible as Literature”, and I had learned enough to think I knew something.  I said, “Bill, that was certainly an anthropomorphic (human like) understanding of God you had in the prayer today.”  And he responded, “John Simmons, you need to go to seminary.”  That was not the response I expected.  Two days later I asked Bill, “But what could I do if I went to seminary? I can’t be a pastor!”  He responded, “Don’t go because of what you are going to do.  Go because it is the liberal arts education you have longed for.”  I went to graduate school on the south side of Chicago within the University of Chicago and loved the education.  I also discovered that I loved God-talk, theology.  And the next summer I worked in a church, Snellville United Methodist Church as “summer evangelist” (imagine that title for a Tech grad!) and loved everything about working in church- to my great surprise and to the surprise of those who knew me at Tech.

How has your experience in biology helped to form and shape your experience as a pastor?
On the most superficial level, educationally I get caught up in the creationism arguments which many get so worked up about.  But I learned a long time ago that science and theology are going about asking different questions- science is asking how and theology is asked who and why.  And science is based on inductive thought looking at data and building theories while faith is seeking understanding from something BIG outside of our empirical observations.  For example, love is different from data.

Solving problems is what I do every day.  Sometimes the problems that I solve are allowing others to solve problems.  I am a very good church administrator but that is not what gives me the most pleasure.  Engaging people in their daily lives and in the important moments of their lives is what I enjoy the most.  Tech taught me discipline.  And developing a sermon almost every week requires discipline. And reading blueprints helps when you start a new church, which I did in Roswell. While we did not talk about it during my time at Tech, I now realize that a systems approach to learning is imbedded in biological processes.  I apply systems theory every day.

Do you have some career advice for new generations of Tech Biology graduates?
Don’t get a job.  Find a calling, a vocation.  Fredrick Buechner says that vocation is when (a) the work that you need most to do meets (b) the work the world most needs you to do.  If you are working in a leper colony and are miserable, you are completing (b) but not (a).  If you are getting a kick out of your work, you are meeting (a), but if you are just doing a job to make money but are not making a contribution, chances are you missed (b). (from Wishful Thinking) I am blessed to have a vocation that in some ways meets both (a) and (b) for me.  If you are smart enough to get in Tech and disciplined enough to get out, you can get a job and make money.  Search for a vocation.