The Fiction of Memory

A Frontiers in Science Lecture by Elizabeth Loftus, University of California, Irvine

A Frontiers in Science Lecture by Elizabeth Loftus, University of California, Irvine

For several decades, Elizabeth Loftus has been manufacturing memories in unsuspecting minds. Sometimes these techniques change details of events that someone actually experienced. Other times, the techniques create entire memories of events that never happened: they create “rich false memories.” Collectively, this work shows people can be led to believe they did things that would have been rather implausible. They can be led to falsely believe they had experiences that would have been emotional or traumatic had they actually happened.

False memories, like true ones, also have consequences for people—affecting their later thoughts, intentions, and behaviors. Can we tell true memories from false ones? In several studies, Loftus created false memories in the minds of people, compared them to true memories, and discovered that once planted, those false memories look very much like true memories: they have similar behavioral characteristics, emotionality, and neural signatures.

Considered as a whole, these findings raise important questions: If false memories can be so readily planted in the mind, do we need to think about “regulating” this mind technology? And what do these pseudomemories say about the nature of memory itself?

About the Speaker
Elizabeth Loftus is Distinguished Professor at the University of California, Irvine.   She holds positions in the Departments of Psychological Science, and Criminology, Law & Society.  And she is Professor of Law.

She also has a faculty appointment in the Department of Cognitive Sciences and is a Fellow of the Center for the Neurobiology of Learning and Memory, and was the Founding Director of the Center for Psychology and Law.

Loftus received her undergraduate degree in Mathematics and Psychology from the University of California, Los Angeles, and her Ph.D. in Psychology from Stanford University. Since then, she has published 23 books and over 500 scientific articles. Her fourth book, "Eyewitness Testimony," won a National Media Award (Distinguished Contribution) from the American Psychological Foundation. Her books have been translated into Dutch, French, German, Japanese, Chinese, and other languages.

Loftus has been an expert witness or consultant in hundreds of cases, including the McMartin PreSchool Molestation case, the Hillside Strangler, the Abscam cases, the trial of Oliver North, the trial of the officers accused in the Rodney King beating, the Menendez brothers, the Bosnian War trials in the Hague, the Oklahoma Bombing case, and litigation involving Michael Jackson, Martha Stewart, Scooter Libby, and the Duke University Lacrosse players.

Loftus's research has focused on human memory, eyewitness testimony, and also on courtroom procedure. Her work has been funded by the National Institute of Mental Health and the National Science Foundation.

Loftus studies human memory. Her experiments reveal how memories can be changed by things that we are told. Facts, ideas, suggestions and other post-event information can modify our memories. The legal field, so reliant on memories, has been a significant application of the memory research. Loftus is also interested in psychology and law, more generally.

About Frontiers in Science Lectures
Lectures in this series are intended to inform, engage, and inspire students, faculty, staff, and the public on developments, breakthroughs, and topics of general interest in the sciences and mathematics. Lecturers tailor their talks for nonexpert audiences. 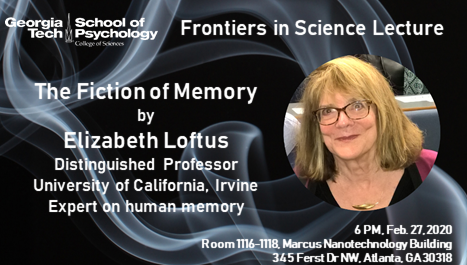