ABSTRACT
Biological conservation in the Neotropics has many challenges. Direct anthropogenic alterations of environmental conditions compounded with climate change may be catastrophic to species survival and maintenance of biodiversity. The top human-mediated threats are habitat loss/degradation, pollution, and exploitation along with climate change’s effects on Andean freshwater systems. Colombia has the highest freshwater crab diversity in South America, but they remain understudied. We produced a case study demonstrates the influence of continued human impacts, including industrial extraction sites for mining and petroleum on the area available for survival of a crustacean species that will be affected by climate change. Species extinctions are likely to occur from the multiple stressors affecting these populations, meaning that those stressors should be a part of determining IUCN Red List species assessments. From this analysis, it is evident that differences exist for how widely distributed species and range restricted species will respond to these interacting stressors as climate changes. 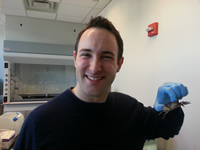