The American Academy of Microbiology (AAM) has elected 109 new fellows in 2019. Among them are Joel Kostka and Joshua Weitz.

AAM is an honorific leadership group within the American Society for Microbiology (ASM). Fellows of the AAM are elected annually through a selective, peer-review process, based on records of scientific achievement and original contributions that have advanced microbiology.

The election of Kostka as AAM fellow comes shortly after another high recognition of his contributions to microbiology. In 2018, he was named Distinguished Lecturer by ASM. In this capacity, Kostka speaks at ASM branch meetings throughout the U.S. His visits provide opportunities for students and early-career research microbiologists to interact with prominent scientists.

Kostka is well-known for his research in environmental microbiology. His lab characterizes the role of microorganisms in the functioning of ecosystems, especially in the context of bioremediation and climate change. He is co-principal investigator of C-IMAGE-III. This consortium is funded by the Gulf of Mexico Research Initiative to study the environmental consequences of the release of petroleum hydrocarbons on living marine resources and ecosystem health.

Weitz holds courtesy appointments in the Schools of Physics and of Electrical and Computer Engineering. He is also the founding director of Georgia Tech’s Interdisciplinary Graduate Program in Quantitative Biosciences, a Simons Foundation Investigator in Ocean Processes and Ecology, and author of an award-winning book on quantitative viral ecology.

"I'm grateful for the recognition and excited to continue our ongoing, collaborative efforts to understand the role of ecology and evolution in shaping microbial and viral life," Weitz says.

Weitz’s research focuses on the interactions between viruses and their microbial hosts, that is, the viral infections of microbial life. Weitz is motivated by seemingly simple questions: What happens to a microbe when it is infected by a virus? How do infections of single cells translate into population- and system-wide consequences?

AAM fellows represent all subspecialties of the microbial sciences and are involved in basic and applied research, teaching, public health, industry, or government service. They hail from all around the globe. Kostka and Weitz join fellows from France, Ireland, the Netherlands, Israel, Korea, Taiwan, and China. 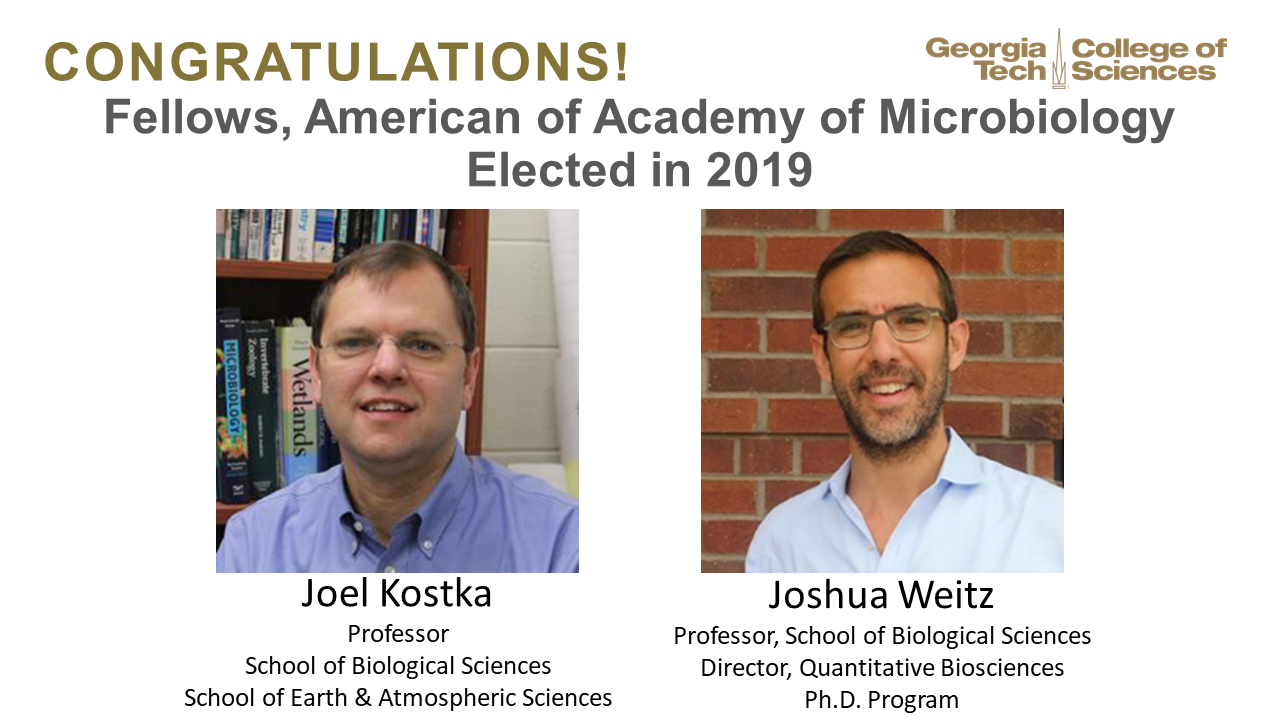 Kostka, Weitz: Fellows of the American Academy of Microbiology