For his latest research on motor skills, visual learning, and their effects on human physiology, School of Biological Sciences associate professor Lewis Wheaton and his team went all the way back to the Paleolithic Era to study a very retro skill: stone toolmaking.

“One of the cool things about this particular study,” Wheaton says, “is this opportunity to look at a completely novel motor task, something most people have no idea how to do, and that’s making a stone tool.”

The new research, published today in Communications Biology, attempts to fill in the gaps when it comes to the science of how we learn complex motor skills — and what may be required to relearn them.

Wheaton says there are studies researching the behavioral changes that are involved with learning complex skills. But research is still thin on how people adapt their visuomotor skills (how vision and movements combine) to carry out a complex task. Wheaton’s current study sought to quantify and evaluate the changes and relationship in action perception processes – how we understand actions, then select, organize, and interpret what needs to be done for a particular task.

“The overall motivation was to determine if we could see any kind of emerging relationship between the perceptual system and the motor system, as somebody is really trying to learn to do this skill,” Wheaton says. Those are important processes to understand, he adds, not just for how people attain complex motor skills learning, but what would be needed for motor relearning, as in a rehabilitation setting.

Tracking the eyes to learn about learning

The test subjects in the study watched videos of paleolithic stone toolmaking for more than 90 hours of training. The subjects’ visual gaze patterns and motor performance were checked at three different training time points: the first time they watched the video, at 50 hours of training, and at approximately 90 hours. Everybody was able to make a stone tool (with varying degrees of success) at 90 hours, but some picked up the skills at 50 hours.

Wheaton says there was a lot of information to pay attention to in the videos. “There’s a lot of physics in (making stone tools). You’re hitting a rock which is made up of all different kinds of material. There could be a fissure or fault lines, and if you hit it the wrong way it could crumble. When you’re doing it at first, you don’t know that.”

As the video training went on, the participants started to pick up cues about how to strike the rock, along with other aspects of toolmaking. “At first you’re watching from curiosity, then you’re watching with intent.”

That was the exciting part for Wheaton and his team: Being able to see the different phases of learning during the training — which they actually could see by monitoring gaze tracking, or where the subjects’ eyes landed on the video screen as they watched (see photo.)

“Part of the study was to understand the variability where they are visually focused as they get better at the task,” he says.

That’s how Wheaton’s team found there are certain parts of the skills learning that connect better to gaze, but others that connect better to the physical act of making a stone tool. “As you’re going through time, your motor abilities are changing, and at some point that allows you to watch somebody else perform the same task differently, suggesting you’re able to follow the action better, and pull more information from the video in a much clearer way.”

The study not only found a connection between gaze and motor skills learning, but that the connection evolved as the learning went on. The next step in this research, Wheaton says, should include brain imaging “heat maps” to determine where learning takes place with this process.

That could also help Wheaton’s team apply these lessons for rehabilitation purposes.

“That’s the link between that and some of the other work we’ve done in a rehab context,” he says. “If you’re watching somebody perform a task, if you’re undergoing rehab, there are different ways you’re watching the task. You’re not always watching it the same way. Maybe it depends on how good you are, or how you’re impaired, but all those variables play a role into what you’re visually pulling out” of the rehab training. 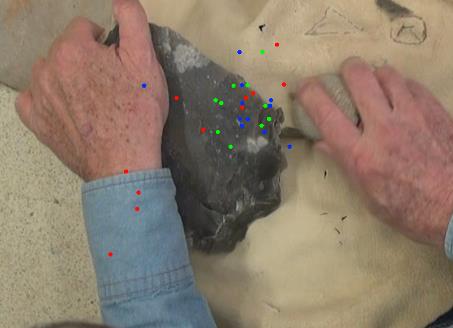 An example of gaze tracking. Subjects are watching stone toolmaking; the red, blue, green dots are where visual focus is during this segment of action. (Photo Lewis Wheaton) 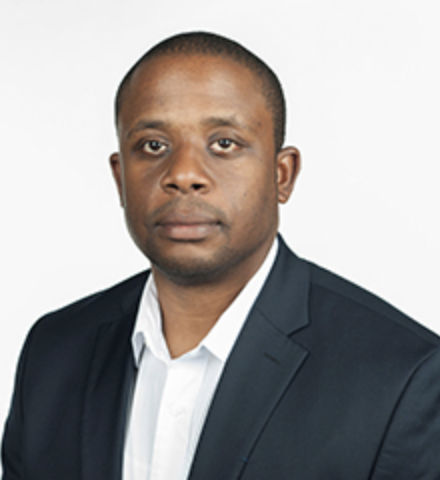