Mark Hay is an experimental marine ecologist known for his work on community, marine, and chemical ecology.  He holds the Teasley Chair in Environmental Biology and is a Regents Professor.  His research has heightened our understanding of marine ecosystems, helped found the field of marine chemical ecology, provided key insights regarding the conservation and restoration of coral reefs, and challenged how scientists view ecological and evolutionary processes affecting the establishment and impact of invasive species. Hay commonly works with media outlets (NY Times, National Geographic, NPR, BBC, Animal Planet, etc.) to assure that basic findings from his group are made accessible to the general public.

He has participated in dozens of ship-based expeditions but more commonly works at remote field stations to conduct longer-term experiments. He has conducted 5,000+ scuba dives and four saturation diving missions (using both Hydrolab and Aquarius) – where scientists live and work at depth on a coral reef for periods of 10 days.  He is identified by ISI’s Web-of-Sciences as one of the world’s most cited researchers in the area of Ecology and the Environment.

Awards include: Class of 1934 Distinguished Professor Award (Georgia Tech’s highest faculty award), the Cody Award in Ocean Sciences (for outstanding scientific achievement in Oceanography, Marine Biology, and Earth Science), appointment as a Fellow of the American Association for the Advancement of Sciences and the Ecological Society of America, the Silver Metal from the International Society of Chemical Ecology (the society’s highest honor), the Lowell Thomas Award from the Explorers Club (as a Visionary of Conservation), the Gilbert Morgan Smith Medal from the US National Academy of Sciences, and he is a member of the National Academy of Sciences and the American Academy of Arts and Sciences.

Hay completed undergraduate degree requirements in both Zoology and Philosophy at the University of Kentucky in 1974, and a Ph.D. in Ecology and Evolutionary Biology from the University of California, Irvine, in 1980. He was a pre-doctoral fellow at the Smithsonian Tropical Research Institute in Panama, and a post-doctoral fellow in Paleobiology at the Smithsonian’s National Museum of Natural History. From 1982-1999 he was faculty at the University of North Carolina at Chapel Hill.  In 1999, he moved to Georgia Tech as recipient of the Teasley Chair. 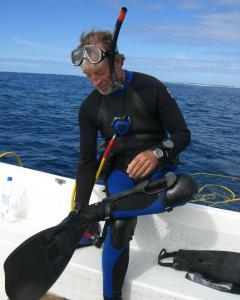